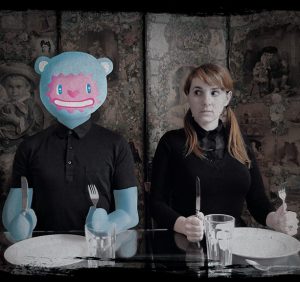 Karrie is a comic creator. Her comics have been published in The Guardian, The Times, Time Out, The Telegraph, BBC, The New Statesman and by The Arts Council. She published two graphic novels with Penguin Random House; ‘The House That Groaned’, and the award winning ‘Death of the Artist’. She developed an award winning comic, ‘Over, Under, Sideways, Down’ about an Iranian teenage refugee, for The British Red Cross, created an installation for the British Council and Southbank Centre and was commissioned to make a ‘Selves Portrait’ for an exhibition with Manchester Art Gallery and the National Portrait Gallery. She has spoken and run workshops worldwide for organisations including The Guardian Masterclasses, TEDx, Central Saint Martins, Oxford University, The Hay Festival, The Big Draw, House of Illustration and The British Library, and presented her work worldwide from Russia to Bangladesh, Lebanon and Mexico. Her work for PositiveNegatives includes the animation ‘North Star Fading’ and comic ‘Sumi’s Story’.

This 'zoom animation' is inspired by the testimonies of 4 Eritrean refugees who fled their homes to make the dangerous journey across Ethiopia, Sudan and Libya to Europe. Illustrated by…

Sumi's Story highlights the gender based violence (GBV) in the garment industry in Bangladesh. Her story was released as part of CARE International's campaign to end GBV in the Asian…