Fighting for Land, Dreaming of Peace tells the story of Daw Bawk Ja Lum Nyoi, a Kachin land rights activist from Northern Myanmar. Daw Bawk Ja has faced displacement, arrest and persecution by the Myanmar government for her commitment to fighting for the rights of ethnic minorities throughout her country.

Read the article from our collaborators at PRIO in The Conversation.

Created utilising multiple life story interviews with the protagonist, ethnographic approaches and artist-to-artist mentorship, this animation was produced both as an innovative qualitative research tool and a co-created engagement piece. As a research output, this film represents both a locally grounded and internationally collaborative creative project. It illustrates how ethnographic approaches can be utilised in practice in animation, by working closely with local artists and research participants as producers. The approach undertook to produce this animation also demonstrates how artists can grow their practice in new mediums through production, and by working with experienced creative practitioners in those formats. 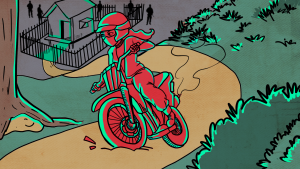 “[Daw Bawk Ja] told me everything about her life, so I got to know her. I respect her, she is so brave and powerful. She always says that it’s not enough to be brave alone, everybody has to be brave. I got to know her and that meant I could build on that. And all the time she also makes jokes. When the government was trying to arrest her and she ran away with the bike – when she was telling this story, she made jokes about it. She’s not too serious, and I like that. It’s more comfortable to draw her story, because she is not too serious about it.” – Kue Cool, Illustrator